Sometimes, I have really great ideas.

I recently set out to make a big ‘ole pot of fresh spaghetti sauce for supper. This is not the great idea. We had a few cans of diced tomatoes taking up space, and these seemed like a practical way to free up the cabinet. AJ helped to season it, and mentioned that it would need to cook down for a few hours. Supper was planned to be done twenty minutes from that time …. So this pot became “for future use” and it was Prego for that meal. Oops.

Practicing being flexible, once the sauce simmered to perfection, I froze it in one big baggie. Apparently I just flung it into the freezer, because the next day it was a very interesting shaped frozen rock. And that’s when I realized. How are we going to be able to eat this? There are only two of us … Its way too much for one meal, but the whole bag needs to be thawed in order to get the amount we need.

*Bing!* The great idea came to me. All those little applesauce bowls I’ve saved for our yogurt mason jars and never used … what if we freeze the sauce in little cups and then pop them out and have little “single serve” pucks?? The plan went into action. 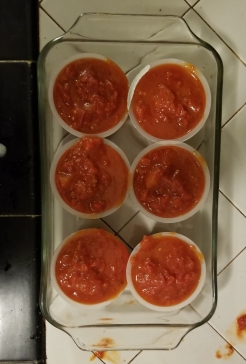 First, I put the sauce in a big measuring cup and arranged the petite cups in a pan. Then, I poured sauce into each cup, covered with plastic wrap and put in the freezer and waited to see if this would all work out. AJ assured me that because it there was oil in the sauce, they would pop out once frozen.

I didn’t get back to the pan for a day or two, but when I did, they were frozen solid. I tried to just pop them out, but that didn’t really work. So, I filled the pan with hot water (careful not to overfill to cover the sauce) and waited a few minutes. After that, they slipped out of their cups pretty easily.

Alex helped me bag up our six pucks and remove as much air as possible. (He’s really good at that). Here’s how they went into the freezer after the whole process. 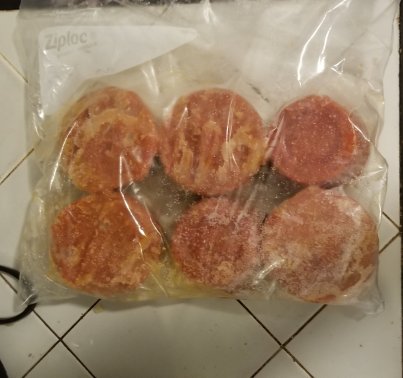 It’s been some time before I was able to use these, but for lunch this week, I made little pasta bowls, grabbed a sauce puck, and enjoyed homemade sauce for one! 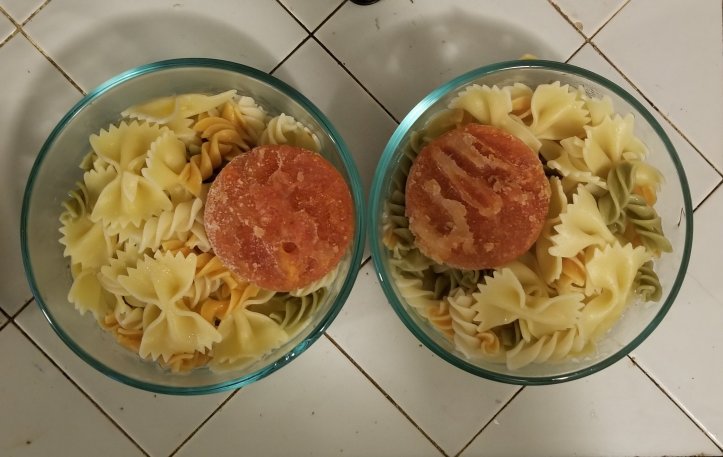